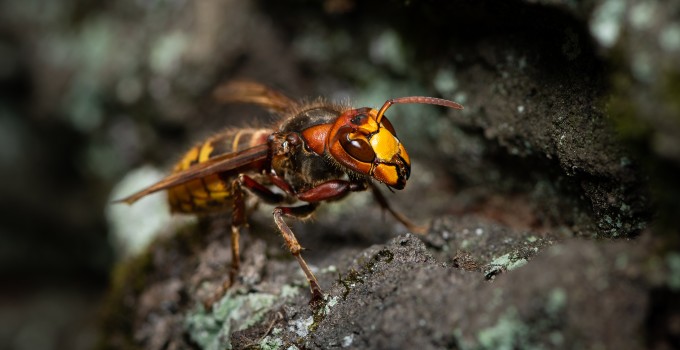 When it comes to pest control, few pests present as many challenges as the mighty hornet. In Lawrence, MO, the most common type of hornet you’ll encounter is the European hornet. Thankfully, you can start fighting back today. Read on as we cover everything you need to know about European hornets and how to combat nesting on your property.

Hornets belong to the genus Vespa, which includes other pests like yellow jackets, that hornets are often mistaken for. Hornets are much larger than yellow jackets, and mature specimens are usually around ¾” in length. Hornets are sturdy and well-built, and they can be identified by their light yellow or white and black coloration. Unlike yellow jackets that primarily nest in the ground, hornets build visible nests in the trees and shrubs planted around your yard. They can also build nests in eaves, under soffits, or in the crevices of aluminum siding. It isn’t uncommon to find hornet nests in your attic or under your deck.

Fortunately, hornets usually don’t attack unless their nest is threatened, so they present less of a risk to humans than yellow jackets do. For most people, hornet stings aren’t much of a health concern, although they can be quite painful. For people allergic to hornet venom, a sting from a hornet is a far greater concern. If you have never been stung by a bee or wasp, you may not even know that you are allergic until it happens. Thankfully, hornets aren’t wood-destroying and won’t physically damage your home. These insects aren’t destructive, but their stings still pose a threat to yourself and your family.

Like most stinging insects, hornets thrive in the warmer months of the year here in Lawrence. During the colder months, the entire colony dies off, with the exception of the queen. The queen of the colony will find shelter through the winter, emerging in April or May so that she can repopulate a new colony.

Yes, hornets can sting. If you swat at them as they fly by or irritate their nest, stinging is imminent. A lot of people will try to get rid of hornets on their own, but this always results in swarms of hornets that sting without remorse. There are literally hundreds of hornets that can live in a nest as it grows. If you disturb their nest, you will be painfully stung by large amounts of hornets all at once. For those who are allergic to bee stings, just one hornet nest could send them to the hospital with possible anaphylactic shock. Always call Schendel if you find a hornet nest on your property to ensure the safety of your family.

How can I get rid of hornets on my own?

If you search through YouTube or by a simple Google search, you can find a wealth of DIY “solutions” and methods of hornet nest removal that you can do by yourself. The downfalls of “natural” or DIY hornet nest removal tactics is that they are always incredibly risky and nearly always fail. The most common method we hear from clients is that they spray the nest with a homemade soap and water mixture, then put the nest in a garbage bag at night time. It may seem strange to most readers, but this is actually a solution that is promoted by non-pest management professionals with no training, found online and actually attempted. This will always result in swarms of hornets with vigorous stings. It’s a complete myth that hornets sleep at night and will not awaken if you put their nest into a garbage bag at night. Even worse, if you disturb a nest, they will just move to another spot on your property to create a new nest. It’s always best to call Schendel Pest Services as soon as you find a hornet nest to avoid getting hurt. Do not touch the nest or interact with it in any way. The best thing you can do to avoid encountering hornets is to prevent their nesting in the first place.

How can I prevent hornets from nesting on my property?

Because hornets mainly live outdoors, it’s difficult to fully prevent them from nesting on your home and within your trees and bushes. However, there are some steps you can take to make your property less appealing to hornets.

How does Schendel Pest Services get rid of hornets on my property?

Schendel’s Premium Care Program is guaranteed to keep your home pest free for one year. We perform an intensive interior and exterior service, then follow up with quarterly visits. If additional pest treatments are needed between services, they are completed at no additional charge. That’s our PestZero Guarantee. Our Premium Care Program include coverage for hornets, ants, spiders, crickets, fleas, silverfish, mice and rats, roaches and more!

Give us a call or fill out the contact form on this page to get started!