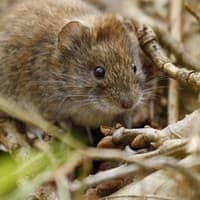 These are two pests that are often confused with one another, and sometimes mistaken for the same animal. But besides having a similar name and a penchant for digging tunnels under your lawn, these two creatures couldn’t be more different. Let’s take a closer look and see what makes them different.

Rodents or not rodents?

Voles are rodents. Moles are not. Moles have no desire to chew on wood, nor are they equipped to do so. They are insectivores that consume large quantities of earthworms and grubs. It is a creature that is built to dig, not chew.

Below ground voles, also referred to as meadow mice, are often blamed for mole tunneling, because they have a habit of utilizing tunneling created by moles. But vole tunnels have two distinct traits that set them apart from mole tunnels. They are thinner, usually only about three inches in width. And they are not raised up, like mole tunnels. Both of these animals damage grass roots as they make their tunnels and can produce those ugly, light brown paths across your lawn, but vole tunneling will be thinner in width. Above ground voles chew through heavy lawns and make runways that look like trenches of dead grass. If you have these, they were not created by a mole.

What damage do moles and voles do?

Unlike voles, moles do not eat plants. They eat copious amounts of bugs, but their tunneling uproots grass, flowers, and plants and will destroy root systems. Though their displacement and loosening of soils provides healthy aeration, which can make your lawn more lush and green, they leave unsightly brown patches and raised tunneling.

Voles are driven to eat plant material, seeds, fruits, bark and underground fungi, and as rodents, they like to chew on wood. This makes them a danger to any fruit tree or vegetable plant in your yard. Their gnawing practices at the base of a tree can thoroughly kill it. It is important to put fences around your gardens (that go at least 10 inches below the ground), and put skirting around your trees.

How do I protect myself from each of these pests?

This is where both pests share something in common. They can both be safely eradicated and controlled by a pest control specialist like Schendel Pest Services. If you have moles or voles, call the professionals and get your lawn protected.