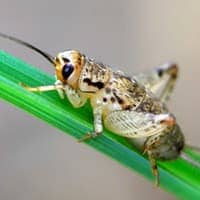 When you think of crickets the word food probably doesn’t come to mind. These are pests that get into our walls and keep us up all hours of the night with their incessant chirping. These are creepy, alien creatures that land on us while we’re watching television and jump us out of our skins. They’re not food. Well, not in the United States, anyway. Maybe on some remote island in the Pacific, but here in America, they’re just pests. Right?

You may not believe this, but health stores are going crazy for crickets. It’s true. As it turns out crickets are high in protein but low in carbs. So, if you’re looking to bulk up, these creepy little bugs will help you put on the fat you need to make muscle without ruining that six pack you’ve worked so hard to create.

Now, before you get a picture in your head of a bunch of John Cena type individuals crunching down on handfuls of crickets, it is important to point out that some clever folks have figured out how to put these creatures into a food product that is actually quite yummy. The crickets are processed into a flour, and that flour is used to make sports bars with tasty nuts and raisins. These bars are so yummy, Mark Cuban, from the television show Shark Tank was convinced. He put up $50,000 to invest in a company called Chapul that creates several brands of gourmet cricket bars.

Sports bars aren’t the only way cricket flour is being used. Another company called Six Foods actually raised a ton of money on a Kickstarter project for a product called Chirps, tortilla chips made from real crickets. And, as crazy as it may sound, people are eating it up. They love the name, and they love this high protein, low carb option for their diet. Who could have ever imagined?

Well, at Schendel, we don’t make sports bars or tasty tortilla chips made from real cricket flour, nor are we encouraging you to, but we can help if you ever have these frustrating bugs invading your home. Chirps may make a clever name for a crunchy snack food, but they are not something you want to have in your wall voids. Cricket songs can be nice in your backyard, but in your home, where they bounce off every hard surface, the noise can be maddening. These hard-shelled and hard-legged critters can also cause quite a bit of frustration when they crawl into things, onto things, or leap at you as you’re walking by. But–if you’re dealing with crickets, we don’t have to tell you these things. You know all about it. What you do need to know is that these pests can be excluded from your home. Give us a call and we’ll tell you all about it.