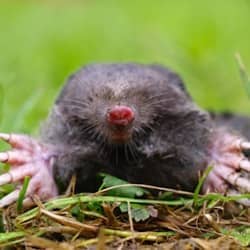 Are you aware that February is Mole Solution Awareness Month? Well, it is. And as a pest control company, we are trying to spread the word. This fascinating mammal is well known as a garden pest, mainly because of their intricate tunnel systems. And though it is commonly believed that they are blind, this is not the case. They can see, though their eyes are tiny, and they can hear, though their ears are not visible. Moles are actually rather cute little creatures, with their little pointed, hairless snouts and large “hands” that they use for digging. In fact, they can be rather comical looking. Just search for “moles” on the internet and see for yourself.

Moles dig, but not just tunnel systems. They also create special rooms along with their tunnels. These serve as bedrooms, kitchens (where they store food), and birthing areas. The tunnels and rooms can be quite extensive and some moles will live in a series of tunnels for generations before moving on. One interesting fact about moles is that they keep their food alive but immobile by biting the heads off of earthworms and storing them for later. According to the Mammal Society, there have been as many as 470 worms found in one mole chamber.

While moles may be cute and rather interesting little creatures, they can cause a whole lot of damage if they aren’t taken care of properly and effectively.

While moles may be fascinating little creatures, they are not something you want taking up residence on your property. If you need help with moles, reach out to the wildlife control experts at Schendel Pest Services today.