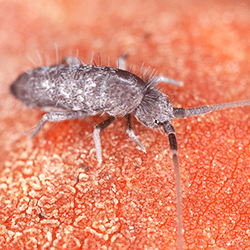 Remember being a little kid and flipping over large rocks or logs just to see what was under it? Even back then, most of us knew that there was a whole other world living just beneath the surface if we just looked for it. All of those creepy crawly bugs would scatter as we disturbed their hiding places. Now that we are adults we probably don’t take any pleasure in finding any of these creatures under rocks. We certainly do not want to find them in our basement, but that is exactly what happens every year across the country. Pests like the springtail find their way in, forcing us to figure out how to get them out.

The springtail is a common outdoor pest that prefers life in dark and damp places where they can eat mold and fungus in peace. They are mostly found under rocks, fallen logs, and under the foliage in the garden as well as debris piles. However, if we go through a dry spell, they will tend to migrate inside looking for moisture. The springtail has commonly been found in the walls around leaky pipes, in damp basements and crawlspaces and under the sink. Luckily, the springtail doesn’t carry disease or hurt the structure but with the sheer number of them, an infestation can be an overwhelming problem for homeowners. They will invade in large numbers and breed very quickly once they become comfortable.

Unfortunately, getting rid of springtails is never as easy as welcoming them in. The problem is, that most of us have no idea that they have moved in until they are already there in large numbers and spread out across the basement. A homeowner might randomly pick up a storage box only to find the bottom is damp and several of these tiny creatures springing to action that may have been there for weeks or even months.

Schendel Pest Service has been dealing with household pest problems for over 70 years. Our professional team will help you find the source of your springtail problem and then work with you to get rid of every last one. Give us a call today for your initial inspection.