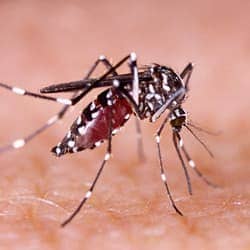 Zika is a fire across all the media outlets in the United States. Until recently, the ‘threat’ of Zika wasn’t as severe because the risk associated with it was only pertinent in a traveling scenario. In order to acquire Zika, one would either have to travel to a Zika risk area or be the sexual partner of someone who already has Zika from traveling to a Zika risk territory. There was no risk of getting it from the local mosquito population; but, as of the end of July 2016, the first locally transmitted cases from the US were confirmed in Miami-Dade and Broward Counties in Florida. While Kansas may not be a near neighbor to Florida, there is still a Zika presence here. According to the Center for Disease Control, between January 1, 2015, and August 17, 2016, there were 9 cases of travel-associated Zika confirmed here in Kansas. Understanding this virus, the insects that carry it, and proper prevention is key to keeping yourself and your loved ones protected.

What is Zika, exactly?

The Zika virus was first identified in 1947 in Uganda. The mosquito that transmits it, the Aedes species, also spreads dengue fever, yellow fever, and the chikungunya virus. Zika outbreaks did not occur outside Africa until 2007 when it spread to the South Pacific. Most people who get Zika don’t ever realize that they have it because they have no symptoms. Some people that get it have symptoms but are never tested. The most common symptoms include:

Microcephaly is a birth defect where the baby’s head is smaller than expected. Babies with this birth defect often have smaller brains that may not develop properly. According to the CDC; “Zika virus infection during pregnancy is a cause of microcephaly and other severe fetal brain defects and has been linked to problems in infants, including eye defects, hearing loss, and impaired growth. Scientists are studying the full range of other potential health problems that Zika virus infection during pregnancy may cause.”

What is the Aedes mosquito?

The Kansas Department of Health and Environment is being proactive in identifying this mosquito and the areas of Kansas that they are in. In a report written on July 06, 2016, on the website of the Kansas Health Institute, the Institute stated: “The Kansas Department of Health and Environment has started a statewide surveillance program to monitor mosquitoes, which it does every year. This year, though, because of the increased concern about Zika, researchers with the Kansas Biological Survey at the University of Kansas will be looking closely for the Aedes mosquito, a species known to carry the virus.”

The Aedes aegypti and the Aedes albopictus are the two mosquitoes that spread Zika. They have tell-tale white stripes on their long legs and bodies and are aggressive daytime biters, whereas most other mosquitoes only bite at night. They live in tropical, subtropical, and temperate climates, but are being discovered more and more in cooler areas.

Get protected from Zika!

Even though we have not had any cases that originated with the bite of a local mosquito, you still need to know how to protect yourself and your loved ones. Zika is transmitted through mosquito bites, from mother to child, through sex with an infected partner, through blood transfusion, and through laboratory exposure. Limit your exposure to these situations and environments and you will limit the risk of getting Zika.

How can Schendel help?

Schendel offers the best in mosquito remediation. Start training yourself and your family in proper mosquito prevention now so that if Zika does become a local problem you will be prepared. Besides, these mosquitoes that we are dealing with presently still carry all those other diseases and viruses that are quite serious.

Contact our pest control experts today and partner up with us to get your home, your property, and your loved ones protection from mosquitoes and their issues.