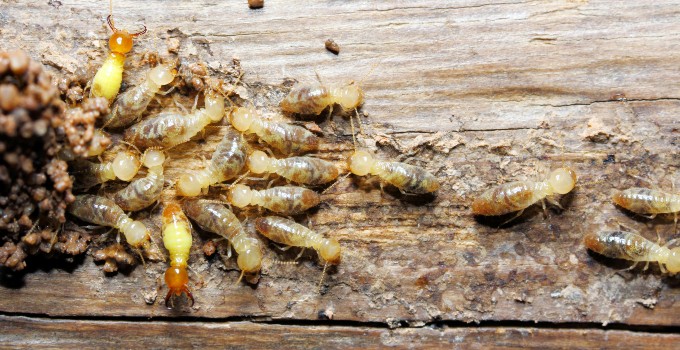 Among the subterranean termite colony, there are soldiers, workers, and alates. Workers and soldiers are similar in appearance as neither has wings. Soldiers have a brown head and creamy-white body. As defenders of the nest, they have larger jaws than the other species. Workers are ivory colored and are small in size with an estimated length of a quarter-inch. The alates, which form the reproductive group, are between a quarter and a half-inch in length. Alates are darkish brown to black and have two pairs of wings.

Signs of Termites in Kansas Homes

Subterranean termites are visible when the female and male winged reproductive termites leave the colony and swarm. These swarms are triggered by warm temperatures and excessive rainfall. The swarming agates have four wings of equal size, which helps identify them as termites versus flying ants that also have four wings, but their front wings are large, and the back wings are smaller. Once the agates have mated, wings are discarded creating small piles commonly found on windowsills.

Signs of drywood termites aren’t always easy to spot since the wood they are feeding on doubles as a space for their colony to live. They are hidden inside the wood, in tunnels, whether it is a door frame, walls, or a piece of furniture. It may take anywhere from five to seven years before signs of damage are visible and before a colony is noticed.

When drywood termites swarm, which may be once a year, occasionally two, the agates, also referred to as swarmers, or flying termites, can be spotted, the swarm is small, so it is easy to miss it. Discarded wings and paint that appears to be peeling or bubbling can be a sign of a drywood termite infestation. Another sign is tiny mounds of frass, which are termite droppings, near door frames or window sills.

When your home or business is under attack by termites, it’s time to call in our team of experts at Schendel Pest Services to eliminate the invading force. With years of experience to rely on, our technicians know how to quickly find, treat, and eliminate termites. Put your mind at ease and use our convenient online form to schedule an inspection.