Most Common Cockroaches In Kansas

Cockroaches are disgusting. They get into our food, taint our dishes, and crawl around on food prep surfaces. When they do, they have the potential to make us really sick. They are linked to the spread of 33 kinds of bacteria, six parasitic worms, and at least seven other human pathogens. But all cockroaches are not created equal. Let’s take a look at the two most common cockroaches you’ll find in your Kansas home and discuss some of their unique issues.

An adult German cockroach is almond shaped, 13 to 16 mm in length, light brown in color and has two horizontal stripes on its back, near the head. Like all insects, the German cockroach has six legs, two antennae, and three body parts. On its back, it has usable wings but doesn’t usually fly unless the temperature is hot. In its nymph stage, these cockroaches are extremely tiny. They’re so tiny they are able to crawl through the holes of a wall outlet. Good luck keeping this roach out.

You would think that the most common cockroach in the United States would be the American cockroach, but it is actually the German cockroach. This is because the German cockroach prefers to live in man-made structures. Though it is a moisture pest, like other cockroaches, it seems more able to adapt to conditions that are too dry for other roaches.

The German cockroach prefers sweet things–everything from pastries to toothpaste. Some of the sweet things they eat are not what we would consider to be food, such as wallpaper paste and the glue that holds hardback books together. This presents two kinds of problems. Their interest in toothpaste could have them rubbing on the bristles of your toothbrush and exposing you to harmful bacteria. Their interest in wallpaper and books could cause these items to be damaged.

German cockroaches reproduce rapidly. A single female cockroach and her offspring can produce hundreds of thousands of offspring in one year, under the right conditions. This is a pest problem that needs to be addressed quickly.

The eggs of German cockroaches are highly resistant to pesticides. In fact, many pesticides are not able to penetrate the egg casings. Attempting to destroy these cockroaches is not only difficult, it can make a family sick. Treatments should always be administered by an educated and experienced professional.

In its adult stage, an American cockroach can be as large as 50 mm long. It is oval-shaped and reddish brown, with a yellowish 8 pattern on its back, below the head. Like other cockroaches, it is an insect with six legs, two antennae, and three body parts. It has wings and is able to fly when hot.

While capable of infesting a home from top to bottom, American cockroaches prefer areas that are moist or humid. You’re likely to find these roaches in the basement, laundry room, bathroom, or in a garage. They’ll also be quite comfortable in a kitchen behind the oven or under the sink. If you have these roaches infesting your home, you’re likely to find them in damp locations outside of your home, such as in flowerbeds.

The American cockroach is very similar to the German roach, as it too can adapt well to living inside man-made structures in the United States. While not as abundant as German cockroaches, it is more abundant than any of us would like. And it is the biggest cockroach you’ll find in your Kansas home.

You may quickly notice the smell of this cockroach because it emits aggregation pheromones. This is a scent that encourages American cockroaches to group together.

When a population of American cockroaches gets too large, these roaches may begin to bite. If they do, it is often on eyelids as they are attracted to the dead skin on eyelashes. Bites usually become infected and swell due to harmful bacteria on the biting roach.

In Kansas, we also deal with Oriental cockroaches, wood cockroaches, brownbanded cockroaches, and other species. But, as far as home-infesting roaches go, these other roach species don’t hold a candle to German and American cockroaches.

If you’re seeing roaches in your home, be aware that a roach sighting is considered rare. These insects are extremely secretive. When they appear, especially in the day, it is usually a sign of a large population.

For assistance with cockroaches in Kansas, give us a call to learn more about our residential pest control options.

When you choose Schendel to protect your home and your family, you can count on our team to implement a home pest control program that eliminates existing pest activity and prevents pests from re-infesting. We treat houses following a carefully developed and proven seven step process – The Premium Care Program.

We are proud to serve Kansas cities & towns including:

Fill out the form below or visit our Contact Us page to get started on your FREE quote! 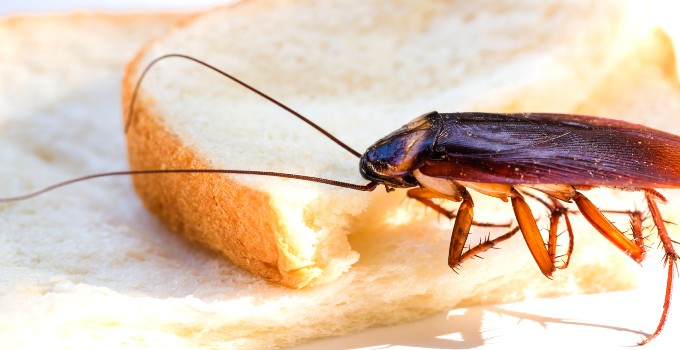 Why Do I Have Cockroaches in My Springfield Home?

Cockroaches are one of the most common insects to invade homes across the US. There are two varieties of home-invading cockroaches in Missouri that you may come across: the American…

Why Do I Have Cockroaches in My Topeka Home?

Cockroaches are one of the most common insects to invade homes across the US. There are two varieties of home-invading cockroaches in Kansas that you may come across: the American…