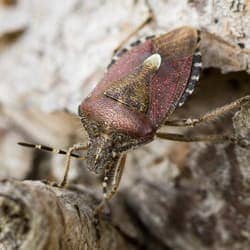 How To Get Rid Of Stink Bugs

If you were born in the 90’s or earlier, you probably can’t remember ever seeing stink bugs when you were a kid. The reason for this is that they didn’t show up in our country until the late 90s, or at least that was when they were first reported. According to Penn State’s College of Agricultural Sciences, the brown marmorated stink bug was “apparently accidentally introduced into eastern Pennsylvania,” and was “first collected in September of 1998 in Allentown, but probably arrived several years earlier.”

It has only been 18 years since that first report of this shield-shaped insect in our country, but they haven’t wasted any time spreading. They are all throughout Pennsylvania and in 38 of the 50 states, including ours. The question is do you want these annoying insects taking up permanent residence inside your home? If you remember seeing only a few of these weird-looking bugs in your house last year, and now they seem to be everywhere then you probably want to know how you can get rid of them.

The truth is it is easier to keep them out than it is to get them out. But there are some things you can do. The following tips will help you to keep stink bugs and other pests out of your home.

How To Keep Stink Bugs Out

How To Get Stink Bugs Out

While there are a number of do-it-yourself tactics you can try to get stink bugs out of your home, the fact is they are very difficult to completely get rid once they get inside. If you saw a few last year and now there are many more, the best thing to do is to call in the experts. Here at Schendel Pest Services, we have been faithfully serving customers and making homes pest-free since 1947. We know a few things about getting rid of bugs, and stink bugs are no match for our certified technicians. Stink bugs may be spreading throughout the U.S. but they don’t have to be inside your home–not with help from Schendel Pest Services.