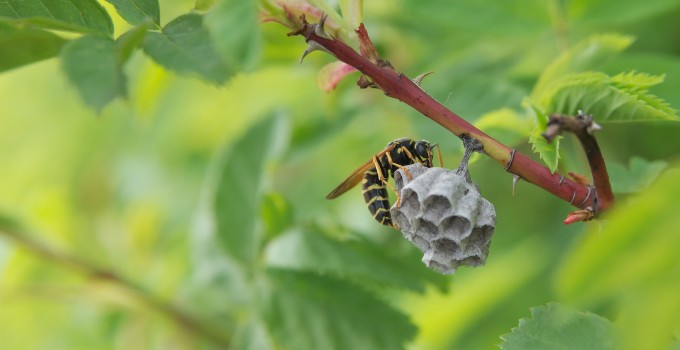 There are different types of stinging insects you might find near your home in Springfield, MO. These include wasps, yellow jackets, and hornets. Stinging insects use a stinger to defend themselves when they feel threatened or feel that their colony is in danger. Most stinging insects are active from spring through mid-fall. They are a hindrance when it comes to enjoying your back deck, yard, or anywhere on your property. It’s also common for stinging insects to nest in shrubs, trees, and fascia boards on the front of your home, making it frightening to enter and exit your front door. Running to your car to avoid stings happens more often than not! Luckily, you don’t have to deal with wasp, yellow jacket, and hornet nests with the proper knowledge of stinging insect habits and Schendel Pest Services in your pocket.

In certain habitats, like forests and fields, stinging insects can be highly beneficial. For example, bees pollinate flowers and wasps prey on nuisance insects, such as spiders, ants, and flies. But when they nest by your home, problems quickly arise. Stinging insects are frightening for most people because of their ability to sting. Being stung by these pests can pose severe risks to those who are allergic to stings.

The most common types of stinging insects in Springfield, MO are wasps, yellow jackets, and hornets.

Mud daubers and paper wasps frequently nest on human-made structures such as houses, sheds, and commercial buildings. Paper wasps frequently nest up under the eaves of your home, under porch umbrellas, under outdoor furniture and playsets, and within grill covers. The easiest way to identify paper wasps is by finding their nest. Their nests are made of multiple honeycomb patterned depressions. The nests look like upside down umbrellas and can host tons of paper wasps at any given time. Mud daubers, also called mud wasps, create nests on the side of buildings and homes, up high. Unlike paper wasps, mud daubers live alone in a single nest that looks like tubs stacked up against each other. Both mud daubers and paper wasps do not cause structural damage.

Yellow jackets are tiny, brightly-colored wasps that cause a painful sting. They are usually found nesting on properties that offer them easy access to food and water sources. In the spring and early summer yellow jackets are building their numbers until they are at their highest in the late summer and early fall. These stinging insects can be found nesting in the ground, behind roof eaves, behind a wall voids, or in an attic space. Also, unsecured garbage and food found at outdoor parties and BBQ’s can attract yellow jackets to a property.

Like yellow jackets, hornets belong to the wasp family. However, hornets are much larger than yellow jackets. In Springfield, MO, the most common type of hornet is the European hornet. They have a brown body, yellow stripes on their abdomen, and a pale-colored face. European hornets are very large and grow to be between ¾ and 1 ½ inches in length. European hornets are generally attracted to properties that offer them food sources and a safe location to create a nest. European hornets tend to place their gray, papery nests off the ground inside tree cavities, barns, and other out buildings. They also frequently build their nests inside chimneys, attics, and wall voids. European hornets are considered to be carnivores and feed on a variety of large insects including: grasshoppers, flies, and yellow jackets; they also feed on the sap of trees and shrubs.

An active stinging insect nest in or around your home can be very dangerous. Stinging insects send approximately 500,000 people to the emergency room each year. Also, in the U.S., more people die each year from insect stings than from poisonous snakes. This happens because many people are allergic to insect stings, which for some, can lead to serious health complications if they don’t immediately seek medical attention.

Unlike some stinging insects, yellow jackets do not die after they sting. They are especially aggressive and will attack multiple times. Towards the end of yellow jacket season which is late summer/early fall, they become desperate for survival. This causes them to be significantly more aggressive as they fight to stay alive. Hornets are also dangerous if their nest is disturbed. As stinging insect season progresses throughout the summer, hornets expand their nest and colony to massive sizes. If the nest is disturbed, hornets won’t hesitate to attack in large numbers.

It’s a common misconception that carpenter bees are stinging insects. Even though they have the ability to sting, carpenter bees are hardly dangerous to humans. Cosmetic damage to wood surfaces is the biggest concern when it comes to carpenter bee infestations on residential properties. To learn more about carpenter bees, visit our pest library by clicking here.

How can I prevent stinging insects from nesting on my home?

Many people attempt DIY tactics to eradicate stinging insects, which are dangerous and ineffective. These methods include:

Taking matters into your own hands can backfire or make the problem worse. Not only are these incredibly dangerous, but they don’t usually work. In almost every scenario, you will be stung. It’s just not worth it when you can hire the professionals at Schendel Pest Services to get the job done for you. The typical homeowner doesn’t have the right equipment to protect against stings and isn’t familiar with the proper techniques to safely remove stinging insects from their home.

Don’t try to get rid of stinging insects on your own! If you agitate a yellow jacket or hornet nest, it is guaranteed that you will be swarmed and stung by several of them all at once. Because yellow jackets live in the ground or within walls, some people think they can kill them off on their own with DIY solutions found online or store bought sprays. This is never a good idea. By spraying yellow jacket nests, you will not kill the entire colony. In fact, it will make the problem much worse. Yellow jacket colonies will relocate close by, sometimes pushing them further into wall voids, into your living spaces, and around various parts of your yard. Call Schendel Pest Services the minute you find any stinging insect nest.

To prevent stinging insects from nesting on your property, be sure to seal off entry points, remove food sources, and avoid wearing bright clothing or sweet-smelling perfume or cologne when spending time outdoors. Secure trash can lids and cover soda cans when you spend time outdoors to avoid yellow jackets. Check your property before mowing the lawn the ensure yellow jackets aren’t nesting in the ground. Being swarmed and stung but yellow jackets is the last thing you want.

If you spot a stinging insect nest around your home, be safe and call Schendel Pest Services right away. Our trained and experienced technicians have extensive knowledge on stinging insect biology and are equipped with professional tools that will get the job done safely and effectively. Call us or fill out the contact form on this page to get started.