What are bark scorpions?

Bark scorpions are a nocturnal, venomous species of scorpion that are found in the Southwestern U.S. They range in length from 7cm-3 inches, are light brown to brownish-yellow in color, and have dark lengthwise bands on their body. Bark scorpions have a slender tail with distinctive elongated, thin pincher.

During the day, they hide in homes, under rocks, fallen trees, and mulch to avoid the heat. At night they come out to feed on small insects including: crickets, roaches, and beetles. Scorpions are usually solitary animals but packs of 20-30 bark scorpions can form during the winter months. 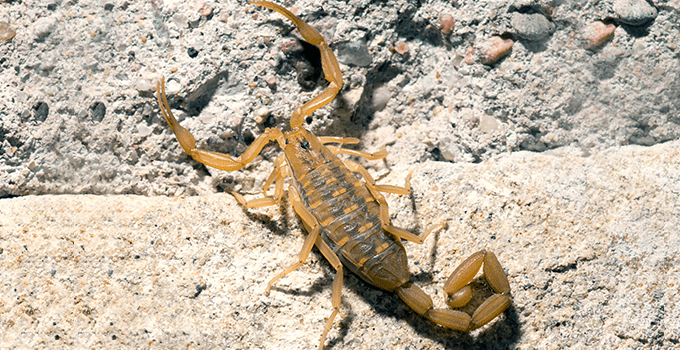 What are the dangers of bark scorpions?

Bark scorpions hold the title of the most venomous scorpion in the United States. The venom from a bark scorpion can cause severe pain and lead to vomiting, shortness of breath, numbness, and a tingling sensation. Symptoms can last from 24-72 hours. The venom of a bark scorpion can be fatal for young children, the elderly, and anyone with a compromised immune system. If you are bitten or think you have been bitten by a bark scorpion, you should seek immediate medical attention.

How can I get rid of bark scorpions?

Bark scorpions should only be controlled, handled and eliminated through professional pest control services.

We offer services through Schendel’s Premium Care program to control and safely eliminate these dangerous pests along with other common pests from your home and property year-round.

Are there ways to prevent a bark scorpion infestation?

Bark scorpions are often found hiding in homes, in fact they only need an area that is 1/6 of an inch in order to enter into a new space. Since they can squeeze through such tiny spaces, scorpion prevention can be difficult. However, there are some things that you can do to help stop them from invading. Scorpion prevention tips include: